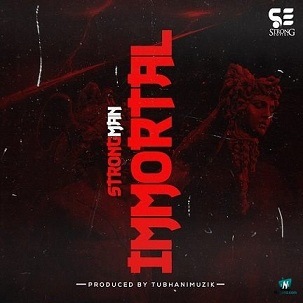 
Outstanding Ghanaian hitmaker, Strongman, pins out this record called "Immortal (Medikal Diss)". The record was released in the year 2019, under the management of Strong Empire. It was produced by Ghanaian serial-hitmaker, Tubhani Muzik, on this amazing instrument.
On this record "Immortal (Medikal Diss)". Strongman, goes so hard on Medikal, one of the Ghanaian respected rappers, as he throws some jabs on him. Strongman again proves his lyrical dexterity coupled with authentic delivery.

Osei Kwaku Vincent, widely known as Strongman, won the Focus FM freestyle Friday in 2010, KFM Freestyle Saturday in 2011, and the Next Big Thing In Ghanaian hip-hop in 2012. This artist has released copious songs since his inception in the music scene, His favoured with many tracks like; Don’t Try, Nana Ama, just to mention a few.
Finally, here comes a diss song, he gave to AMG Bussiness Kontrol Recording artist, Medikal.

Share Strongman - Immortal (Medikal Diss) Mp3 with others on;