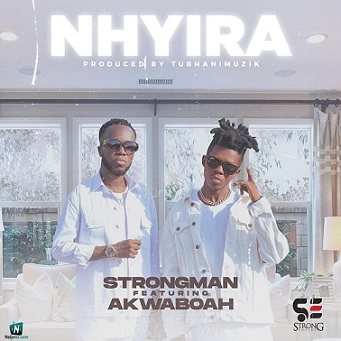 
Strongman teams up with Akwaboah on this new record named "Nhyira".


Multiple-Award-winning Ghanaian talented rapper and songrwiter, Strongman, released a new record called "Nhyira" with vocal assistance from Akwaboah, who gave a top-notch rendition on this record, which is a potential hit jam, highly anticipated... Released in the year 2021.
The collaboration between these two talented artists, Strongman and Akwaboh, is an excellent one. With perfect voices, both artists performed perfectly well on the number, which will be generally accepted his their music fans and supporters.

Gladstorm Kwabena Akwaboah Jnr, widely known as Akwaboah, came through number after he gave us "Ensesa" which is still blasting speakers and climbing major music charts. Akwaboah is known well for his credibility in the muisc scene, he has assisted many Ghanaian artists, to make it in the Industry. His versatility is something to count on

Here comes a record, by Strongman starring Akwaboah tagged "Nhyira'. The song is really worth listening to. Produced by no other person than Tubhani Muzik.

Share Strongman - Nhyira ft Akwaboah Mp3 with others on;