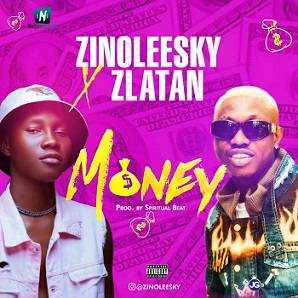 
Another monstrous sound has been released by the Marlian Music Records vibe machine, Zinoleesky which he tags Money starring Zlatan.


This year, 2019 we announce to you another hit banger which has finally been released by Oniyide Azeez who is widely known by his stage name Zinoleesky featuring the Zanku Music Records boss, Omoniyi Temidayo Raphael better known as Zlatan Ibile. This song called Money was produced by Spiritual Beat.

We are still enjoying hit songs from this young talented Nigerian singer, Zinoleesky such as Caro, Who Knows featured Lil Frosh, Naira Marley, and many on to be mentioned. Now he decides to drop this one he tags Money with assisted vocals from the Zanku leg work introducer, Zlatan Ibile.

From the look of things we can see and testify that Zinloeesky is such a talented singer, his songs tell it all about his musical talent and potentials. If you listen to this song by Zinoleesky alongside Zlatan, trust me you will surely like to put it on a replay mode when listening to it.

Share Zinoleesky - Money ft Zlatan Mp3 with others on;