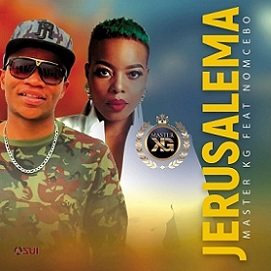 
The South African artist and record producer Master KG who was Born and raised in Tzaneen surprised the world with this astonishing dance track titled Jerusalema featuring his co country female singer Nomcebo Zikode. Master KG records in his South African language. He has become popular with the release ever trending song tagged Skeleton Zanda Zakuza which earned him an award in the AFRIMMA Award for Best Artist/Group in the African Electro category.

Master KG showcased another dance track titled Jerusalema featuring the South African female vocalist, Nomcebo Zikode that has started going viral online. It has accumulated over 10 million views on YouTube and Instagram handles and has generated extensive airplay across Africa.

He released this single Jerusalema featuring Nomcebo Zikode in 2019 after the success of his viral hit jam captioned Skeleton alongside Zanda Zakuza who infected the song with an inspirational verse that was professed in her county language. Jerusalema has been topping the Billboard chart as number 5 and also in the Apple Music and spotify.